So on Wednesday night, I was at my sisters house in Muldrow, Oklahoma working on editing some photos from last weekend, when I got word that we were in for some rough weather. 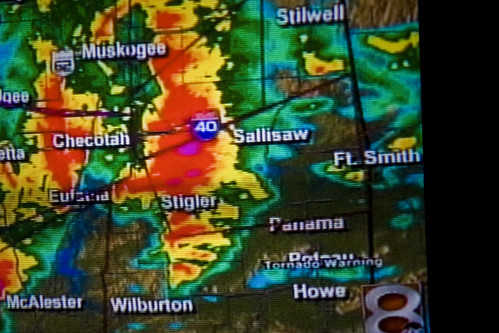 Muldrow is about halfway between Sallisaw and Fort Smith.

So I get my camera ready for action and I go out and take some pictures, but nothing is really happening yet, although the tornado sirens were going off. I shot this picture of the clouds. 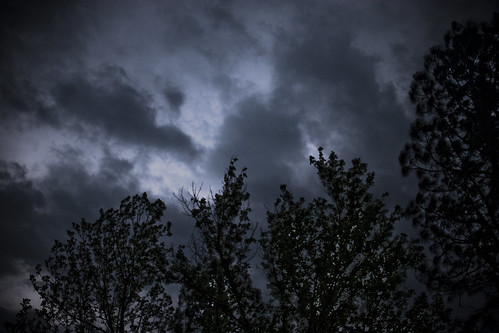 You can’t tell from the picture, but there are two layers of clouds and each layer is moving a different direction and quickly, which means rotation.

But pretty soon, it got really dark and the wind started blowing. I hung by the front door of her house for as long as I felt safe, but once it started to hail, I went inside and hid out in the hallway. The power went out and so we were sitting around in the hallway fiddling with batteries and radios and flashlights.

I’m kicking myself for not grabbing my little video camera and recording the noise, but the wind and hail was about as strong as I’ve heard/seen it. It definitely had the roar of a tornado. I remember the tornado that hit Fort Smith and Van Buren in 1996 had a very similar vibe and did very similar damage.

Once the sound died down and we came out of hiding, we surveyed the damage. It was still raining very heavily so I donned a rain jacket, grabbed my camera and went out shooting! 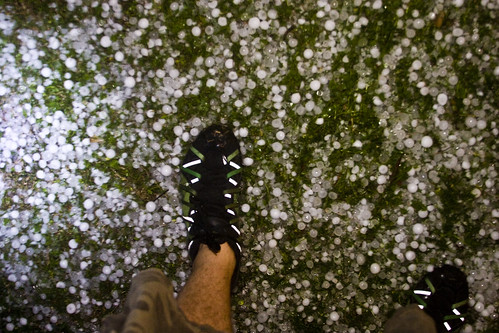 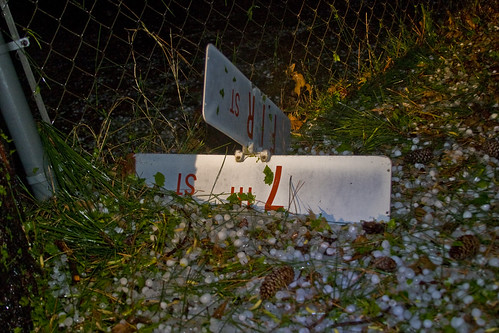 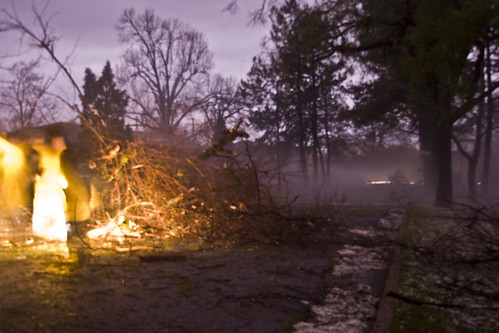 This shot is a long exposure of a tree that fell and blocked the road. The power is still out at this point and it’s still raining. It was pretty much pitch black out, except for the lightening and people’s flashlights, both of which illuminate this shot. 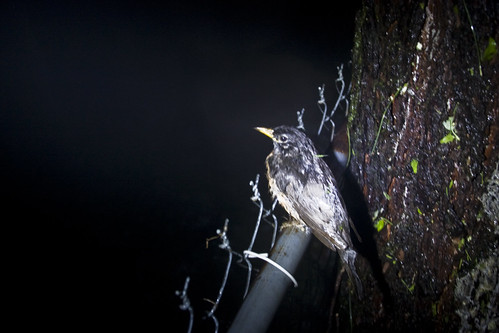 This guy was in a state of shock. He just sat on the fence not knowing what to do. I was able to touch him and I took several shots of him without much a response. Eventually he did fly away though.

My sister’s house had some damage. 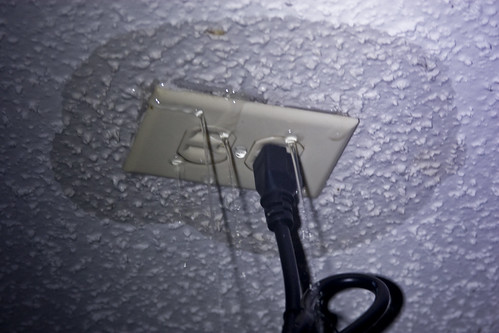 This is in the ceiling of her garage. The high winds blew many shingles off the roof and the rain came right through the attic and dripped out of the electric outlet.

There wasn’t really a whole lot for me to shoot, because it was raining and very, very dark. We knew the damage was pretty significant, but until we got some light we couldn’t tell how bad.

The storms lasted throughout the night and I didn’t get much sleep.

In the morning, I got up and went out to take more pictures. The storm knocked down tons of trees, but luckily none landed on the house. 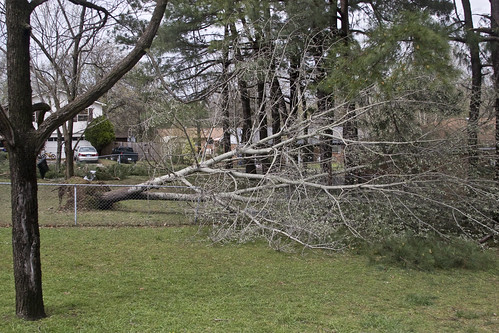 This one did fall down into the yard and crushed the fence. 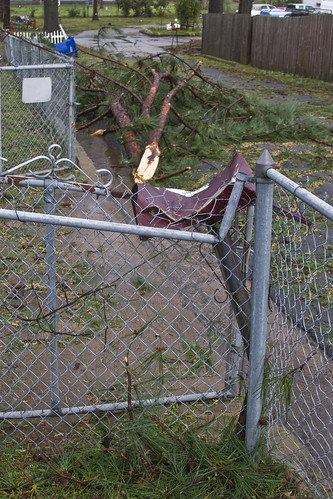 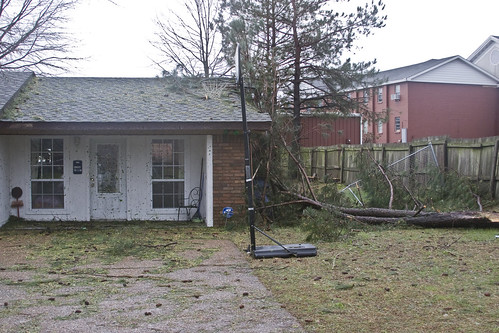 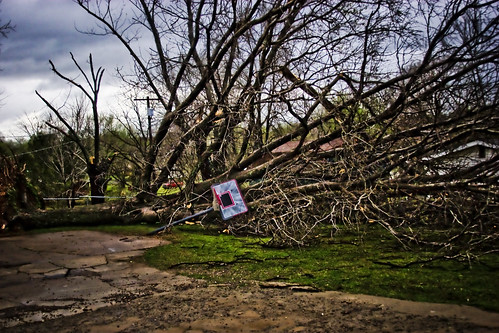 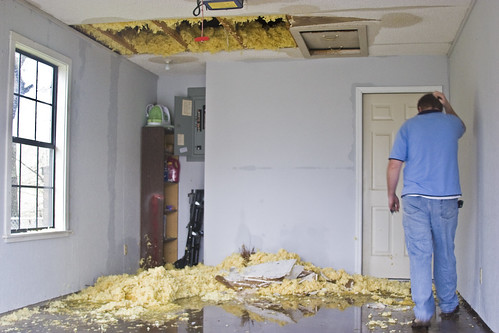 So during the night, the constant rainwater dripping through the roof, into the attic, and through the ceiling, caused it collapse onto my sister’s car. Luckily, there was no damage to the vehicle. 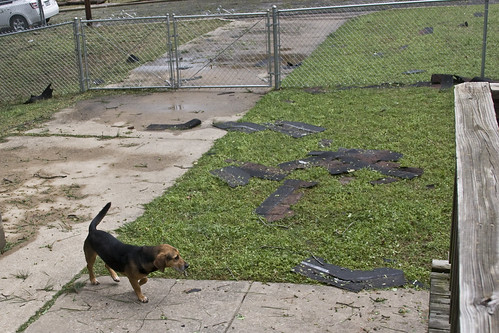 Charlie helps me check out the damage. There were shingles everywhere. 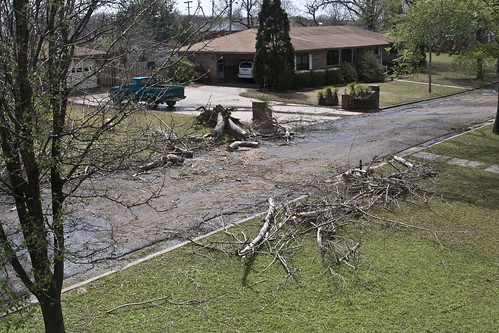 That’s the tree from the earlier shot after it’s been cut up and cleared out of the road.

After checking things out in the neighborhood, we decide to go find something eat. There’s still no electricity in Muldrow so cooking isn’t going to happen.

Here’s some shots from around town. 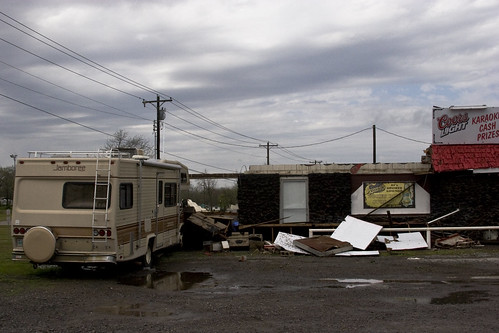 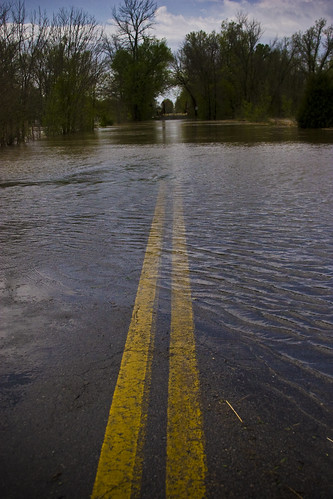 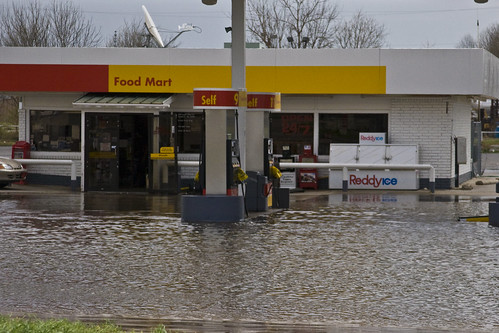 After the tour, I help my sister’s husband put a tarp on the roof and chainsaw up some of the fallen trees. 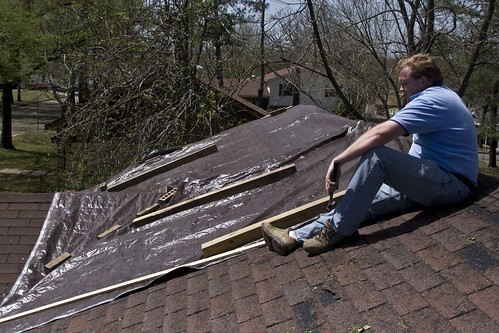 By the time we finish, the power has been restored and I get to work finishing the edits on the photos from last weekend.

Here is a link to more info about the storm from CNN.com

In far east-central Oklahoma, Muldrow was particularly hard hit, with state officials reporting damage to more than 200 homes and businesses from straight-line winds. The city was pounded with heavy rains, marble-sized hail and sustained winds of more than 60 mph, Officer Jose Flores said.

I have heard that Fort Smith had incredible hail damage with car windows being busted out and any west facing windows on buildings and houses also being busted. The flooding is supposed to be pretty severe too, although at the time of this writing, I haven’t been over to my parents house to check out the damage.

Blog News
I'm an Atlanta portrait photographer available to shoot your headshots, corporate portraits, studio portraits, location portraits, editorial portraits, commercial portraits, advertising portraits, and whatever else you want me to shoot. I'm easy to work with and value each one of my clients. Get in touch with me if you'd like to talk. Thanks for reading!