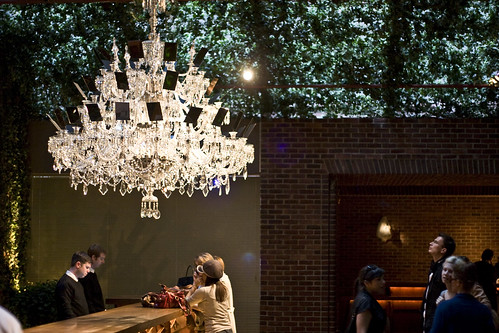 One of my stops in New York was the Hudson Hotel. Very interesting, but took very few pics.

The Hudson is clearly intended to be young, fun, and cheap (the rooms start at $95 a night) but also gorgeous-a reflection of Schrager’s current philosophy that contemporary life is not about how much money you have but how much you know. “It’s like an Ivy League college that’s been invaded by E-kids,” he says. Starck, reached at the Bordeaux oyster farm he retreats to in the summer, puts it more picturesquely: “It’s as if you’re a cyberkid and you go on holiday in the house of your English grandmother, who is a little strange because she takes acid.” In other words, it’s architecture as theater, a series of stage sets for the people Starck calls “our tribe,” those who, whether in New York, London, Tokyo, or Milan, seek out a certain measure of style. (from Vogue)

Blog
I'm an Atlanta portrait photographer available to shoot your headshots, corporate portraits, studio portraits, location portraits, editorial portraits, commercial portraits, advertising portraits, and whatever else you want me to shoot. I'm easy to work with and value each one of my clients. Get in touch with me if you'd like to talk. Thanks for reading!