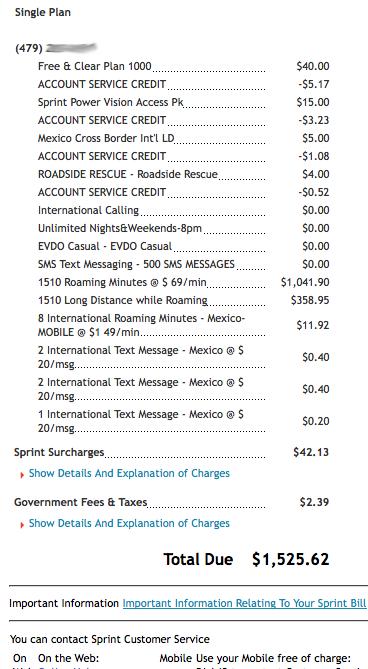 My heart started beating faster when I opened my email, checked my Sprint bill and saw that $1525 was about to be automatically withdrawn from my checking account to pay for this. I’m signed up for automatic payments so that part wasn’t a surprise, but the amount definitely was.

What happened was that a long time ago, I was given free roaming on my account because I was having lots of trouble connecting to sprint towers and I was dropping phone calls about once every 5 mins. It was driving me crazy and after about 3 hours of working with Sprint Technicians I was ready to drop Sprint and go with another company. However, they eventually suggested I put my phone on “Roaming Networks Only” and that did seem to solve my problem. They told me they would give me free roaming so that I wouldn’t be charged.

For some reason, my free roaming got turned off but my phone is still set to “Roaming Networks Only” so I was racking up those roaming charges which resulted in my astronomical bill.

I called Sprint Customer service, which if you notice at the bottom of the bill, is provided “free of charge”, and I got it worked out. I was on the phone for 1 hour and 34 minutes but after getting up the chain a little bit, they were helpful and solved my problem. Just think of the disaster I would be in if I didn’t catch this in time.

I really have been treated well by Sprint Customer Service which is why I’ve been a customer for 7 years now. They truly value me as a customer and they prove it by giving me a really great deal on my plan. The service could be improved, but I don’t know of any cell phone company where that isn’t true.

My contract is actually up in one month so I’ll entertain the idea of switching, but probably will stay with Sprint.

What cell phone company do you use and how do you feel about them?