Well it’s been a busy couple of weeks. I got an apartment with a cool roommate. Neither one of us had much in the way of belongings so I’ve had to buy some ‘stuff’ which I was hoping to avoid, but alas, we can’t have everything we want. So I bought some ‘stuff’ and am making a home.

Last week was big item stuff like a bed and desk. This week I bought a bunch of little things I needed like lamps and shower curtain rings. Also last week I bought a new camera and lens. I bought the Canon 50d and the Canon 24-70mm 2.8 L lens. More on that in another post…

I think during the month of January I’ve single-handedly kept the economy going. Now I need to plug up the hole in my bank account.

School is going well. I love my assignments and am working sort of hard on my homework. I’m in an Intro to Photography class and I’m kind of slacking in there because I know everything that’s being taught. However, I am paying attention to the way my teacher is teaching it, so that I can become a better teacher of photography. He does some stuff well and other stuff not so well.

I must confess I haven’t been getting up at the sunrise lately. It’s been pretty cold in Atlanta and it’s very hard to wake up. So, in return I have been putting in extra effort for my sunset shooting. I feel like I’ve gotten a few really good images lately. I would share them, but… well… I just don’t feel like it.

I’m in a photoshop class too. I’m learning a lot and getting comfortable with some stuff that I definitely should have already known. Photoshop is one of those things I knew I needed to get some training in. I knew a lot, but wasn’t professional level yet. With this class and then the next photoshop class, I feel like I will be a true photoshop ninja. However, I still don’t really like working in photoshop, so I’m going to keep trying to get it right while I’m shooting.

My Illustration class is going well. I’m learning to paint and my teacher makes me feel good about my efforts even though I can tell I’m even worse at painting than I am at math. I might never share my painting efforts with the world. I don’t want to lose my few readers.

I’m getting around Atlanta without having to consult a map now. I pretty much know the major roads and have figured out when not to be driving, although sometimes it can’t be avoided, because most of the time rush hour coincides with the rising and setting of the sun.

I signed up for Netflix. I’ve been wanting to do that for awhile, but haven’t had a stable address. However, now that I’ve got an apartment, I’m all about watching some dvd’s. Before you bust my chops for watching movies while I’m supposed to be doing school work, let me point out that I’m in a visual communications school. My teachers are constantly assigning us to watch specific movies or a certain style of movie. I’ve already watched two movies about painters with a third on the way, and two films about the Vietnam war (for my first big photoshoot). Watching movies is a big part of being a visual artist.

And because I like to post photos with each post, here is a shot from the official New Student Welcome party a few weeks ago. The theme was “Hollywood”. I present to you the Spice Girls: 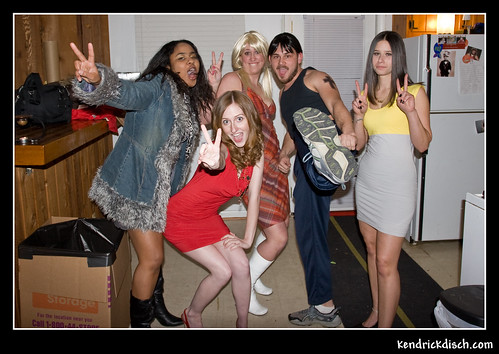 Life in Atlanta Photo School Stuff
I'm an Atlanta portrait photographer available to shoot your headshots, corporate portraits, studio portraits, location portraits, editorial portraits, commercial portraits, advertising portraits, and whatever else you want me to shoot. I'm easy to work with and value each one of my clients. Get in touch with me if you'd like to talk. Thanks for reading!