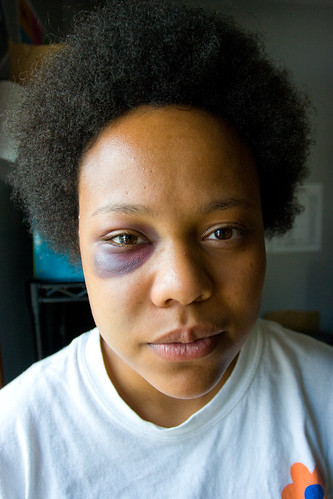 This pic was taken 5 days after the injury.

It was very very dark and I was running as fast as I could to grab the flag or at least untag one of my teammates. She was standing between me and the flag and she reached out to tag me, I tried to go around her, and in the process, my elbow made quite an impact with her cheek and eye. I knew from the second I hit her, that it was a pretty severe injury. We stopped the game and went to get her some first aid. At first we thought it was just a black eye, but when it wouldn’t heal, she went to get x-rays and they confirmed the fracture to her zygomatic bone, commonly called the cheekbone.

She took it like a champion and just so that everyone knows, she tagged me out an instant before I nearly killed her with my elbow. Good job Hannah!

4 thoughts on I’ll break your face!