My little brother got married in Salt Lake City, Utah over the weekend. I tried to go, but the gods of travel were against me from the start. 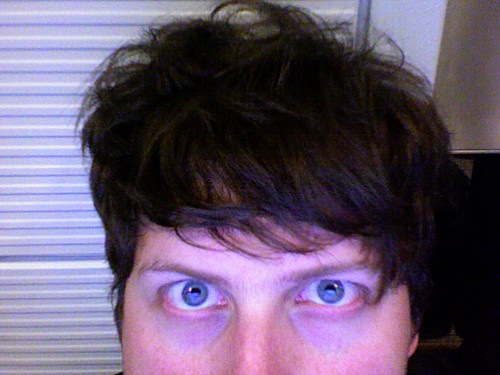 I worked all week to make sure I could take friday morning to pack, intending to show up to work an hour and half later than usual. I knew I had a long day of travel ahead of me, and a long week of work behind me, so I felt an extra hour of sleep was justified. But, I started getting calls from coworkers requesting me to get to the office as soon as possible because of a crisis.

I finished packing, loaded up the car, and drove to work. Worked hard at solving the crisis, then left for the airport.

Takes an hour and 20 mins to get there, find out weather in Chicago is causing air travel to get rerouted. After several attempts, the ticket agent finally gets me a series of flights that will put me in Salt Lake City around 2:20am on Saturday morning. The wedding starts at noon on Saturday.

Fine. I can handle it.

Check my luggage, head through security, get flagged for ‘special screening’ and pulled aside. Unfortunately, I accidentally forgot to pack my pocket knife into my checked baggage, so when I unloaded my pockets into the bin, I suddenly had about 4 TSA agents around and they escorted me to a secure area and I had to explain why I tried to bring a prohibited item on board. They were cool about it and I was able to return the checked baggage area, and they were nice enough to find my bag so I could put my knife in there. Then I was back in the security line, was still flagged for special screening, got patted down, had my camera gear searched by hand, including swiping for bomb making chemical remains.

I didn’t help the situation any, by asking if I could take pictures and trying to get them to explain what kind of “threat” they were looking for.

Anyway of course they didn’t find anything and I was on my way. I sat down, put my headphones on, and started sorting through photos in Lightroom. Next thing I hear is “Passenger Disch, you have 1 minute remaining before the plane door is closed”, I run over to the counter, say sorry, and jump on the airplane. 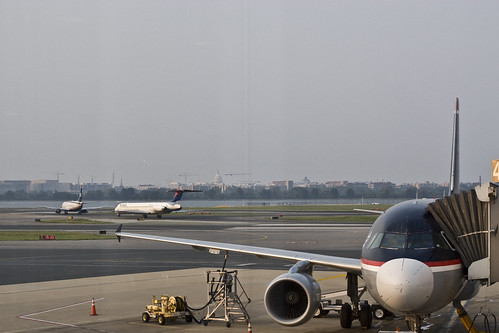 My first layover is in Reagan National in Washington DC, you can see the capital building in the pic above. 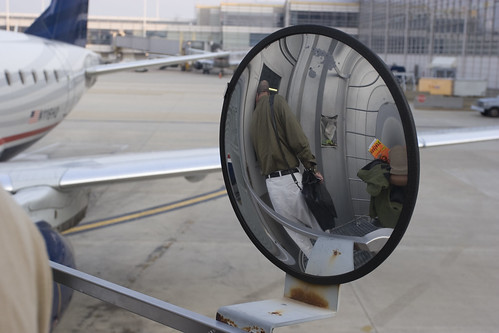 When we land, we are locked out of the building for some reason!

For some reason the gates are not in numerical order, so I have a bit of trouble finding my gate, but do succeed with time to spare. I had time to spare because I find out my flight from DC to Vegas got delayed by two hours. From 8:40 to 10:40. Which of course, causes me to miss my flight from Vegas to Salt Lake City.

So I talk to “special services” and see what they can do to get me there on time. Unfortunately, they couldn’t do much. It was getting to be so late in the day and I had to get there so early, it just couldn’t be worked out. 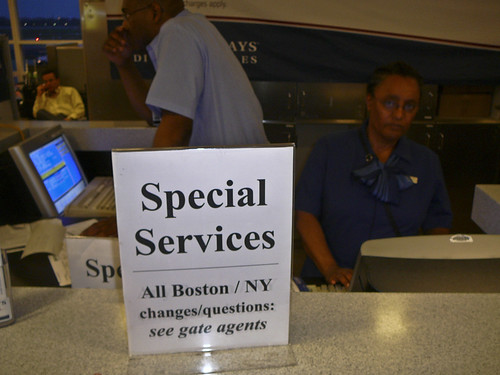 Doesn’t that woman look excited about helping me get to the wedding on time?

I ask if they can at least give me a hotel room in Vegas and they say no, they can’t, because they don’t give accommodations for weather problems. 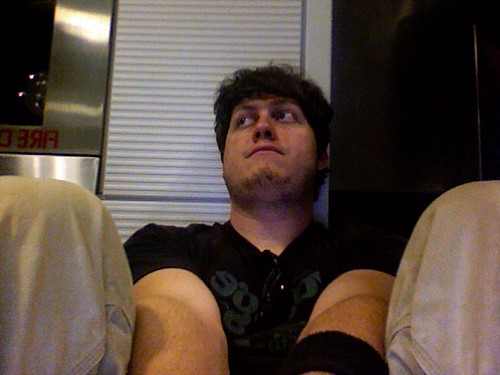 I sit around in the DC airport for a few minutes talking to some people and working on organzing some photos in lightroom. Eventually I realize my gate changed again, so I go find my new gate and start doing some photo editing on some HDR photos. Finally I hop on the plane to Vegas and we take off around 11:00pm.

During the flight, a pretty bad movie called “Fool’s Gold” is on, so I watch it and then I try to sleep which doesn’t really happen. Due to the time zone thing, I get to vegas around 1:30am, but it was a 5.5 hour flight. Much to my surprise they have an accommodations packet waiting for me when I land and in it is my hotel voucher, my shuttle to and from the hotel voucher, and a 5 dollar food voucher.

I consider spending my time out on the city taking shots of the strip, but I wanted a shower and internet access and maybe a nap, so I choose to go the hotel. By the time I’m checked in it’s around 2:00am and I am going to be picked up by the shuttle again at 4:45am. I chill at the hotel, nap for a few minutes, shower, drink some coffee and head back to the airport on my free shuttle.

Since I left the airport, of course I have to go through security again, and again I’m ‘randomly’ selected’ for ‘special screening’. They pat me down and unload my backpack searching for ‘threats’. This time I got a picture of it, by using the built in camera on my laptop! 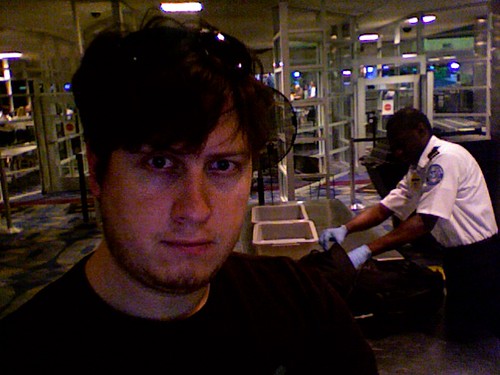 I spend my 5 dollar food voucher on some starbucks coffee and listen to some music on my ipod for a while. 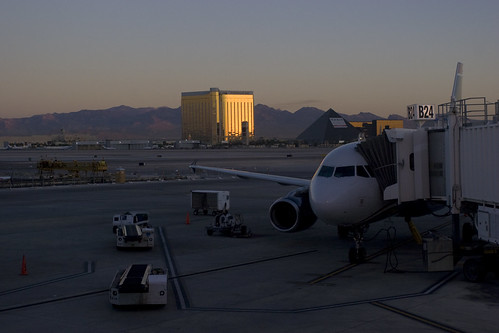 As the sun comes up, it reflects off the Mandalay Bay Casino and Hotel. 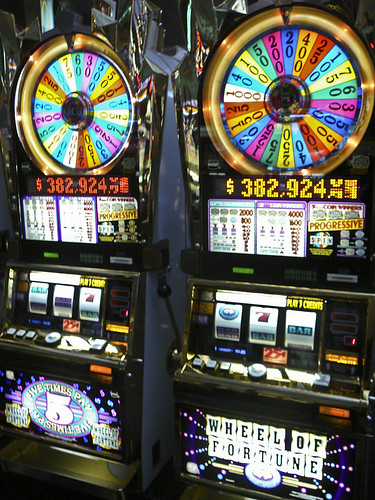 Did you know they had gambling in the airport? I didn’t!

Finally, get on the airplane bound for Phoenix, but much to my dismay we are delayed by runway congestion. We sit on the tarmac for an extra 20 minutes doing nothing.

The flight to Phoenix is pretty quick though and I don’t miss my connection to Salt Lake city. I’ve got a few moments to sit down and relax but the clock is ticking closer and closer to the wedding and I’m sitting there watching planes take off and land. 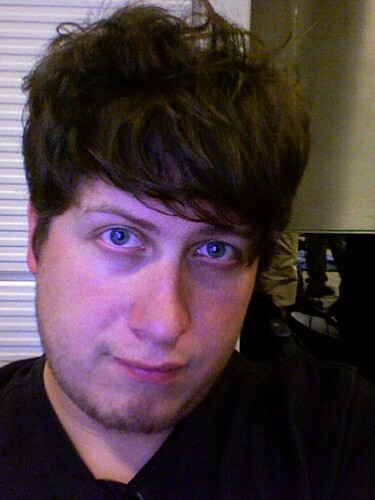 Finally I’m on way to Salt Lake City and I’m sitting next to a cute girl that likes photography and I try to talk her into taking some workshops in Maine. She lives in Salt Lake City so I’m asking her about things to do and places to go for photography. She eventually tires of talking to me and falls asleep, while I watch an episode of “The West Wing” that I had on my Ipod.

I didn’t have my camera handy, but the Great Salt Lake was pretty amazing looking from the air!

Anyway, my flight lands at 11:50. TEN minutes before the wedding. Much to my surprise my checked bag actually followed me all the way and after grabbing it, I run to the rental car counter and ask for the fastest car they have, because I’m in a real hurry. They didn’t laugh.

For some reason no one wants to rent SUV’s anymore so they were having a special and I was able to rent a 4runner for the same price I would’ve been able to get a car, IF they had any cars available which they didn’t.

So it’s nearly 45 minutes from the airport to the church that my brother is getting married in. Me and the 4runner know each other well, so I’m able to deftly manuever through traffic and contstruction zones at a fairly high rate of speed.

Once I’m close to the church, I call my sister to find out what’s going on and I find out the ceremony has ended and now they are taking formal portraits. I rip into the church parking lot, quickly throw on a dress shirt and tie and bust into the church just as it’s my turn to be in some photos.

So yeah, I missed the wedding ceremony, but was able to catch the picture taking and the reception, so my epic traveling was not wasted. I was in 5 airports in 24 hours and all of them were airports I had never been to before.

I hung out in Salt Lake City taking pictures the next day and I will be posting them on my photoblog at www.kendrickdisch.com/blog over the next few weeks as I get time to sort and develop them.

Also, in case you are curious, I had no troubles on my return flight.

One thought on Epic Journey to Salt Lake City

What gear would I buy for documentary filmmaking i

New episode of “this digital life” just went u

Another bag review is up on the YouTube channel! T

This is my coworker Levi. He guards the door while

Which side are you on? Can’t sit this one out!

New video up over on YouTube. link in bio! #bagrev

“Dad, it’s Saturday, why are you still sitting

New backpack review video out! Check the link in b

A few years ago @jamjam2000 and I went on an aweso

I’m always open minded about bags and how to car

Just published my review of one of my favorite cam

The world lost a great one. Kenny Rogers was a leg

I’m sorry for not posting much lately. I was ver

What gear would I buy for documentary filmmaking i

New episode of “this digital life” just went u

Another bag review is up on the YouTube channel! T

This is my coworker Levi. He guards the door while

Which side are you on? Can’t sit this one out!

New video up over on YouTube. link in bio! #bagrev

“Dad, it’s Saturday, why are you still sitting

New backpack review video out! Check the link in b

A few years ago @jamjam2000 and I went on an aweso

I’m always open minded about bags and how to car

Just published my review of one of my favorite cam

The world lost a great one. Kenny Rogers was a leg

I’m sorry for not posting much lately. I was ver

Look up once in awhile!

It’s @Gronk! Getting to interview him for a @ver

I’m smiling because of my new hat! If you guys a